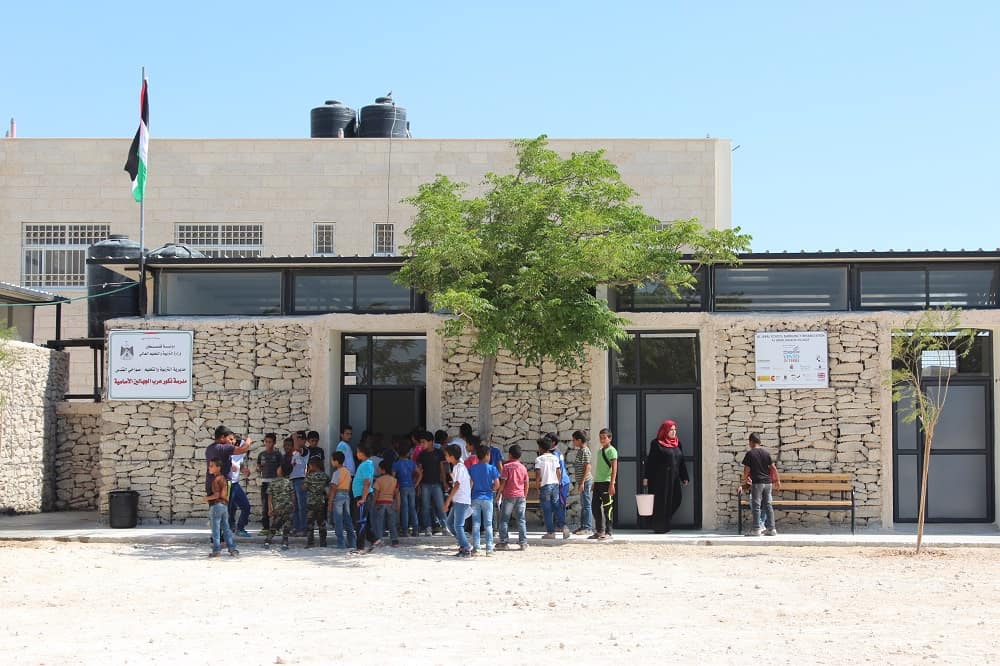 The Al Jabal community represents an example of the consequences of a realized forced displacement towards Bedouin Communities in area C: an emergency where basic human rights are neglected and social services altogether lacking. The emergency has also been underlined by local press, by a report published by UNRWA and a lecture held in Jerusalem, May 2013 -“Al Jabal: a study on the transfer of Bedouin Palestine refugees” – by the Director of the Oxford University Refugee Centre.
Starting from 1997, 150 families of the Salamaat Jahalin Bedouin community were forcibly transferred by the Israeli Authority from the area actually occupied by the Ma’aleAdumim settlement to a site that is today a satellite of the Palestinian town Al Azariye, formally known as Arab al Jahalin village or Al Jabal. Three Jahalin villages in the area were demolished by the Israeli authorities to make space for the Ma’ale Adumim expansion and, following a legal dispute that lasted years, a master plan has been set up by the ICA for the creation of the village in Area C. Despite the community refusal to negotiate a relocation with the Israeli authorities, the Bedouins were forcibly moved and secured with compensation.

Ten separate kinship groups of Salamaat-Jahalin Bedouin were evicted from their isolated rural communities into one concentrated space next to a municipal garbage dump, forming a satellite to the town of Eizariya. The rural spaces from which the Bedouin were evicted rapidly became new urban neighborhoods of the Israeli settlement of Ma’ale Adummim, recognized as illegal under international law. The centralization of 150 families into a condensed location on the margins of an urban environment enforced the transformation of the traditional economy and social fabric of the incoming Bedouin Palestine refugees. In addition, the move ignited deep discontent between the local community of Abu Dis as the historical owners of the al Jabal land and the incoming Bedouin to whom the land was allocated as “state land” by the Israeli authorities. Ultimately, as a result of the transfer, the transitioning Bedouin are today experiencing the radical reshaping of their social, economic and commercial landscapes. Today al Jabal is a periphery of Al Azariye (north). Like other Palestinian towns, it is cut off from East Jerusalem, its center of social, cultural, religious and commercial life, by the Separation Barrier.
Houses in al Jabal today are still precarious, made by concrete, containers and metal sheets. Even if, since the ICA master plan, the village have electricity and water connections, these are often precarious, not properly functioning and not secure nor healthy.
Finally, it is important to underline that, since the official master plan approved in the 90s, all the rehabilitation interventions foreseen by the present project are allowed by the Israeli Authorities.

At the top of the village, a new secondary school has been built with UNDP funds. The contrast with the neighboring primary school, target of the present project, which is housed in sub-standard structures, like containers without windows, no electricity connection, half-destroyed walls and roofs, lack of a functioning toilette system, water infiltrations and lack of any kind of insulation, was definitely evident. The Al Jabal primary school is attended by 123 students (46 boys and 77 girls) and it was characterized by 9 classrooms (6th 7th and 8th grade male classrooms only, 6th, 7th, 8th 9th 10th 11th grade for girls only), 1 store room, 2 staff rooms and toilettes while served by 15 teachers, 1 principal and 1 assistant. The structural, security and safety situation was very deplorable and an emergency rehabilitation was particularly needed, especially for those classroom hosted in the containers.

The project which started on 24th August 2014 and ended – after 9 months – on 31st May 2015 has been successfully implemented in full coordination with the local community, Al Jabal village council as well as with the Palestinian Ministry of Education and the Education Cluster: 6 new classrooms have been constructed, 5 classrooms have been rehabilitated, 2 school staff rooms, and 1 director room have been improved through the rehabilitation of iron and wood containers, School facilities have been improved, through the realization of new toilets, separated for boys and girls, increasing school hygienic standards, the surrounding landscape has been adaped to education purposes.

The construction of the classrooms was implemented with the use of metal gabions filled with selected local stones: this technique should provide environmental comfort and be respondent to bioclimatic architecture principles. Since the main objective to be achieved in a passive climatic control strategy approach is to build a high-performance envelope, the walls, characterized by stone-gabions, are thermally and acoustically insulated, and with a strong thermal mass.

Palestine > The schools in the desert > Al Jabal school