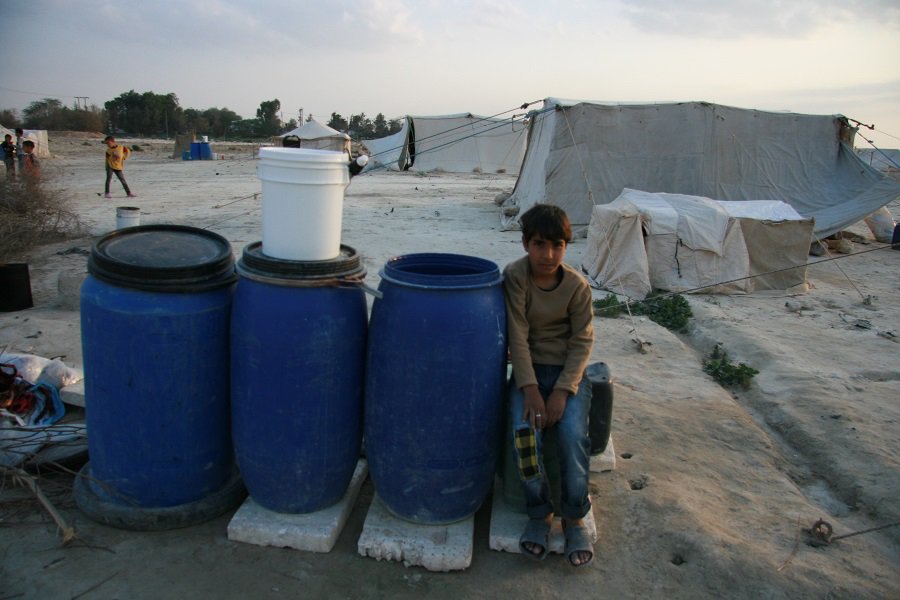 More than 600,000 Syrians fled to Jordan since the beginning of the civil war in 2011. Forced to abandon everything and quickly, arriving in extreme vulnerability, with a growing need of care services and primary goods.

Most of them moved in search of better living conditions and the possibility of a job. They thus created the so-called “informal refugee camps”: here the water is contaminated, children are not in school, sick people are without assistance. Syrian refugees in informal camps are left on their own.

Vento di Terra launche the campaign “SYRIA EMERGENCY: DON’T LEAVE THEM ALONE!” with a program to ensure a minimum level of care and services, so that the Syrian families sought refuge in Jordan can begin to hope for a decent life.

OBJECTIVE: support communities of five informal camps between Mafraq Governorate and the Jordan Valley, with particular regard to the supply of water, habitability, health care and children education.

Vento di Terra has developed emergency kits to be distributed to families in informal refugee camps. The distribution will continue throughout 2014:

CLEAN WATER KIT, for the purification of gray water / irrigation: backwater, poor hygiene and the massive presence of flies leads to diseases: children suffer from intestinal verminosis and dysentery, infections among adults are common. The kit is composed of a manual pump complete with filter for sediment and bacteria, and it is sufficient for the needs of 3 families. It is a portable briefcase containing a system capable of making the water tanks drinking with few operations.

FAMILY KIT, with mattresses, blankets, towels, pots and pans: the majority of families lives in tents or makeshift shelters, reinforced with wood, jute bags and plastic. Fled from the war, many of them have been able to take with them only the clothes they were wearing.

Donate a family kit from 70 euro

SCHOOL KIT, with backpack, books, pens and school equipment: children of informal camps often do not have access to public schools and suffer from psychosocial trauma caused by the war, such as agoraphobia, socialization difficulties, bedwetting, insomnia, aggressiveness. Some informal camps organize a kind of school in the central tent: here the children sit on the floor, there are neither chairs nor blackboards, few have books and pens. The kit also includes a fee for the purchase of the school-tent equipment.

Donate a school kit from 25 euro