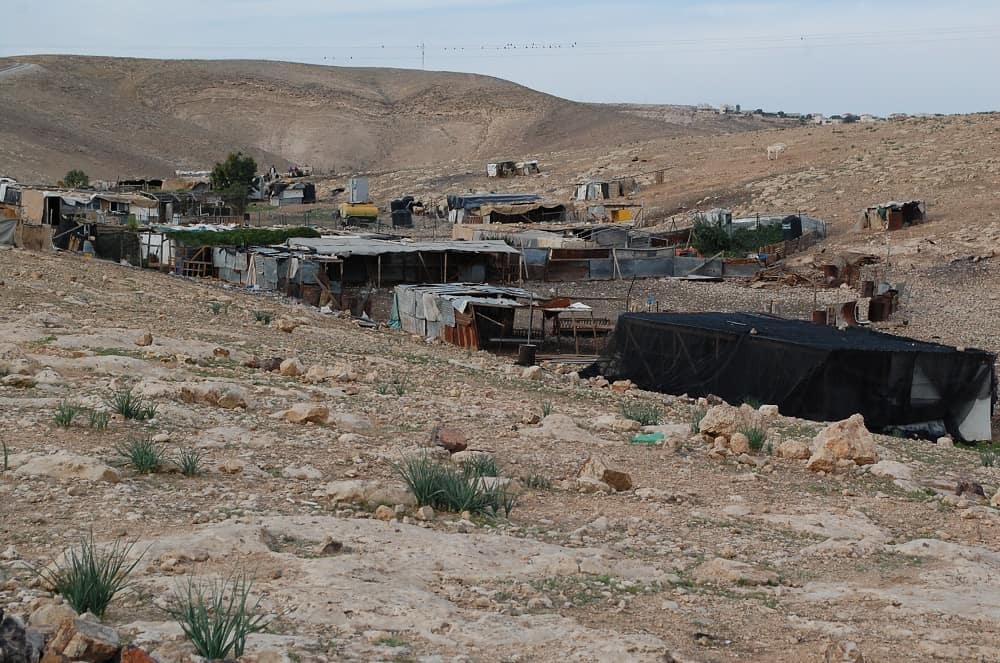 Jerusalem, 10 March 2017 – A Palestinian Bedouin community is at imminent risk of forcible transfer, a grave breach of the Fourth Geneva Convention, if the Israeli government acts on military orders to demolish an entire village in the Occupied West Bank, as early as this Sunday.

A coalition of over 80 international humanitarian, development and human rights organizations is calling for urgent international intervention to prevent the demolitions and subsequent forcible transfer of 130 people, more than half of whom are children.

Israeli authorities issued 42 demolition orders threatening nearly every structure (approximately 140 in total) in the community of Khan al Ahmar-Abu al Helu, with residents given until this Sunday to “self-demolish” their own homes and structures or face bulldozers destroying the village.
A number of the threatened structures were funded by the international community as part of humanitarian and development programmes, including a school serving 170 children funded by an Italian NGO, and with support of UN Agencies and Conferenza Episcopale Italiana. Demolitions could proceed anytime from Sunday 12 March unless a high court injunction is granted or diplomatic pressure succeeds in deterring implementation of the demolition orders by Israeli forces.

President of Vento di Terra NGO Barbara Archetti said: “This is devastating for families who risk being forced from their homes if the Israeli authorities go ahead with this plan. This is just one example of the insecurity that thousands of Palestinians live with every day.”

“Unless the International community makes clear that it will hold the Government of Israel accountable for such violations, we will see homes, animal shelters and even a primary school razed to the ground,” she said.
The UN has repeatedly warned that the proposed ‘relocation’ by the Government of Israel of Palestinian communities would amount to forcible transfer, a grave breach of the Fourth Geneva Convention.

Oxfam’s Country Director Chris Eijkemans said: “These alarming developments must be seen in the context of the settlement policy and broader trends toward Israeli annexation of Palestinian land.”

“Large scale demolitions of Palestinian properties are taking place against the backdrop of the recent passing of the so-called “Regularisation Law”, which allows Israeli authorities to appropriate private Palestinian property, in clear violation of international law,” Chris Eijkemans continued.

DanChurchAid’s Country Director Antony Grange said: “Khan Al Ahmar is just one of many Palestinian communities at growing risk of demolition and forcible transfer. The pressure on these communities is intense. Forcible transfer of Khan al Ahmar – in the way we fear it may unfold in the coming days – would set a deeply worrying precedent for other communities at risk.”

The Association of International Development Agencies calls on the international community, including the EU and its Member States, the US, and other international actors to:

Khan al Ahmar is one of 46 communities in the central West Bank (combined population of approximately 7,000, of whom 70 per cent are Palestine refugees) which the UN assesses as at risk of forcible transfer due to Israeli plans to move them to one of three designated ‘relocation’ sites, which would constitute a grave breach of the Fourth Geneva Convention. These relocations would pave the way for settlement expansion and de facto annexation of occupied Palestinian land to Israel. Palestinian homes and structures are often demolished on the ill-founded justification that they are ‘illegal’ because they were built without Israeli-issued permits, despite the fact that such permits are almost impossible to acquire. 2016 saw the highest number of demolitions of Palestinian structures since UN record-keeping began, close to double the previous year – 1,094 compared to 549 demolished in 2015. 2017 has already seen 174 structures demolished to date. (Source: UNOCHA oPt)

Khan al Ahmar is located in Area C of the West Bank close to the illegal settlement of Kfar Adumim, east of Jerusalem and adjacent to the so-called “E1” corridor. The E1 plan, put on hold by Israel after protests from the international community, would effectively annex the unlawful Israeli settlements of Ma’ale Adumim, Kfar Adumim and Qedar to Israel by placing them inside an expanded separation wall. This would further divide occupied East Jerusalem from the West Bank, separating Palestinian communities from each other, effectively dividing the West Bank in two, rendering the possibility of a contiguous Palestinian state impossible.