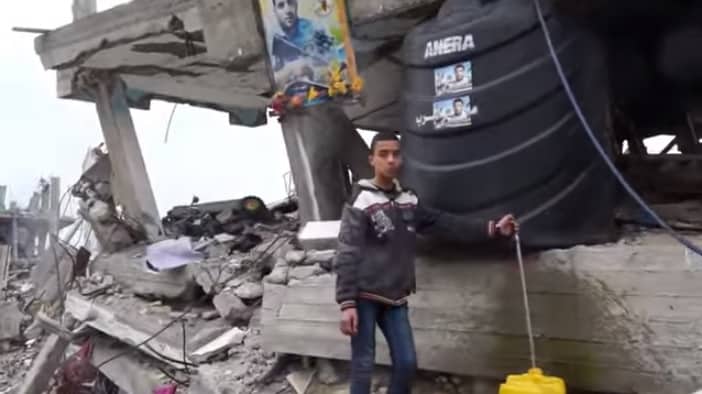 One year after the end of the military operation “Protective Edge”, which cost the lives of over 2.200 Palestinians, Gaza is still a pile of rubble.
The materials for the reconstruction, which Israel allows to enter through Erez, are not accessible to the Palestinians.

This video, realized by Marco Rossi, voluntary videomaker of Vento di Terra, shows the situation in Gaza in the months following the operation “Protective Edge”.

The operation “Protective Edge” was the third war in six years in the Gaza Strip. It threw the 1.8 million inhabitants of the Strip, locked up in an area of 362 square kilometers, in an unprecedented economic crisis and despair.

According to the World Bank, the Strip has the highest unemployment rate in the world, the 40 percent. Among young people, who represent the majority of the population, the number rises to 60 percent. According to a survey published in June, one resident out of two wants to emigrate.

More than a year later, the children have still signs of the trauma they experienced and suffer severe emotional stress. During the war, 551 Palestinian children were killed, 3.436 were injured and at least 1.500 have become orphaned. Three-quarters of Gaza’s children wet the bed regularly, while 89% of parents stated that their children have strong fears and 70% of children refers to fear another war. Seven out of ten children have regularly nightmares.

Vento di Terra this year has been working constantly to restore services to the population of Um al Nasser, after the destruction of the Children’s Land: the construction of the new Woman Center has been initiated and completed and will be inaugurated in November, the kidergarten has been reactivated in a temporary building, the education activities are continuing thanks to the support of the adoption class program.

You can help to support the people of Gaza!

ADOPT A SCHOOL CLASS IN GAZA