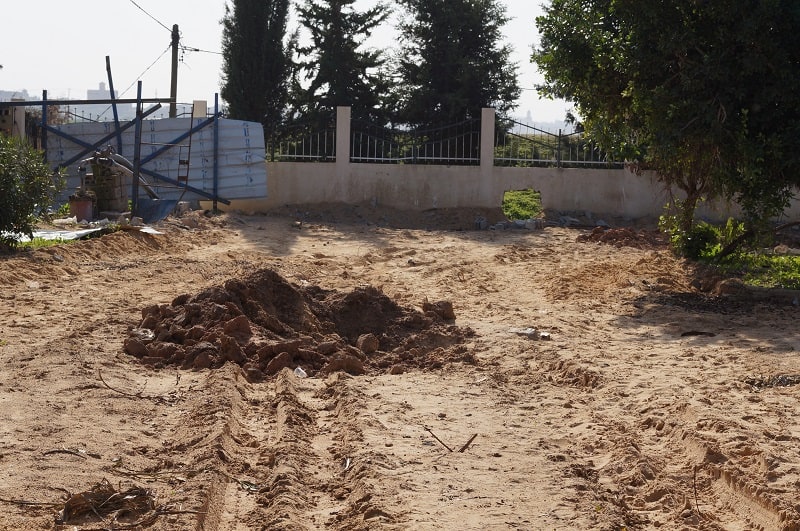 Here we are, everything is ready to lay the first brick!
The new project of the Children’s Land center will be modular and will include the essential units to restore all the services implemented in the old center, from children education to women support and the pediatric clinic.

The first unit to be built is the Woman Center, a place to give support to the Bedouin women. Women have been in fact severely affected by the latest conflict and do not have a place where they can be supported and helped. The new women’s center will host a counceling and psychological support service, and two laboratory (tailoring and carpentry) that will enable women to learn a job and to have an active role in their own society.

The land on which the new center will arise has already been identified.

In the last weeks, the Municipality of Um al Nasser in coordination with AK, local engineer of Earth Wind Project, have proceeded to clean the site: before cleaning, in fact, on the site there were rusty dumpsters, garbage and even a generic half-destroyed building. Now, all these have been removed. Moreover some trees, that were on the portion of the ground where the building will be built, were repositioned: in such a way, they were not lost and could be used to improve the quality of the open space dedicated to the woman center.

After the cleaning, geotechnical testing have been made to understand the nature of the soil in the project area, an activity that is always made before starting a construction, to understand for example if it is an area with high seismic risk or not. It’s also important to understand the composition of the soil and consequently adapt the foundations or the depth or the type of foundation to ensure the structural stability of the building. The tests were positive, detecting a ground absolutely suitable for the construction.

The construction works are unfortunately slipped in a few weeks than expected because of the difficulty in finding materials and the soaring costs: the reconstruction materials enter into Gaza with a dropper and are controlled by Israel.

The woman center will be built with bioclimatic architecture and all the bricks that will compose it will be made on site. The manufacturer has been identified and in a few weeks we will see the foundations of the new center!