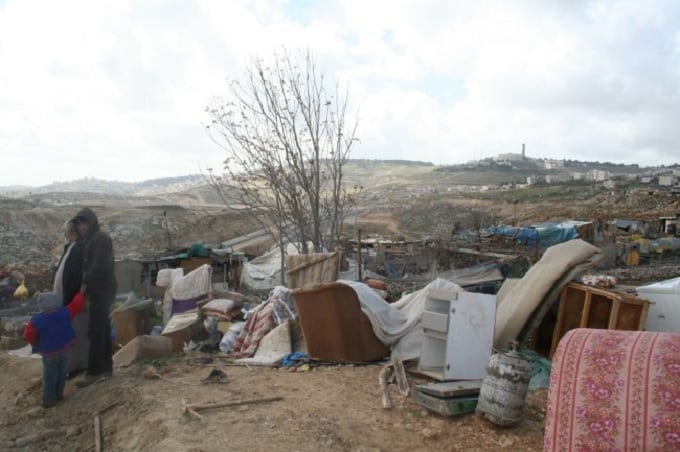 The decision comes after Israel’s Channel 2 revealed that the EU had distributed a number of mobile structures in the E1 area of East Jerusalem in addition to areas in Essawiyeh. The Israeli civil administration has said it would not allow any illegal structures in these territories, including those distributed by the EU. One EU source said in response to Netanyahu’s decision that: “The structures were distributed because of the Palestinians’ urgent need for them.” The source added that the EU was opposed to any settlement construction in the West Bank, including the E1 area in east Jerusalem.

The EU is building hundreds of illegal structures in the West Bank, which the government has not removed in order to avoid a diplomatic tangle with the Europeans, according to a report released Friday by the NGO, Regavim. The structures are being built near Ma’aleh Adumim and its E1 area. This report is just one of a number the group – a right-wing organization which describes itself as a “research-backed, legal advocacy organization focused on land ownership issues” – has released in recent months.
According to Regavim, European Union support for the Palestinians has in recent years moved from “passive diplomatic and financial assistance to a situation of active cooperation in illegal building which the Palestinian Authority has been advancing unilaterally since 2000, as part of its strategic plan to create a Palestinian state de facto, while avoiding the need for negotiations with Israel.” […]
Maj.-Gen Yoav Mordechai, the coordinator of government activities in the territories (COGAT), was in Europe this week holding talks with high-level EU officials. One diplomatic source said this issue was one of the topics of his conversations. A COGAT representative, referring to the Regavim charge that it is reluctant to take down the structures because of EU involvement, said: “The civil administration acts against illegal construction, and no organization is exempt from enforcement. COGAT has sent official letters to embassies and international organizations cautioning them against building illegally in Judea and Samaria.”
Regavim claims EU support for these structures is part of a Palestinian plan to gradually take control of large parts of Area C, the 60 percent of the West Bank that, according to the Oslo Accords, is under full Israeli control.
The EU has for years increasingly focused on shoring up Palestinian development in this area, believing it vital to the viability of a future Palestinian state. […]
The underlying idea behind the joint Palestinian/EU efforts in Area C, Briggs asserted, is to establish a permanent Palestinian presence on the state lands there. “This is great hypocrisy,” Briggs said. “Any time a building goes up for Jews, they raise an outcry, call it illegal and say it endangers peace. They are building illegal houses for Arabs.” From 2012-2014, according to Deutsch, the EU – at the cost of millions of euros – has put up more than 400 structures.
In response, the EU said it is providing humanitarian assistance to communities in need in Area C in accordance with the humanitarian imperative; it is committed to supporting the development of Area C for the benefit of Palestinian communities; and it consults with the local communities themselves and the Israeli authorities where necessary. According to a statement issued by the Office of the EU Representative in east Jerusalem, the EU is “deeply dismayed by and strongly opposes Israeli plans to expand settlements in the West Bank, including in east Jerusalem, and in particular plans to develop the E1 area.” […]