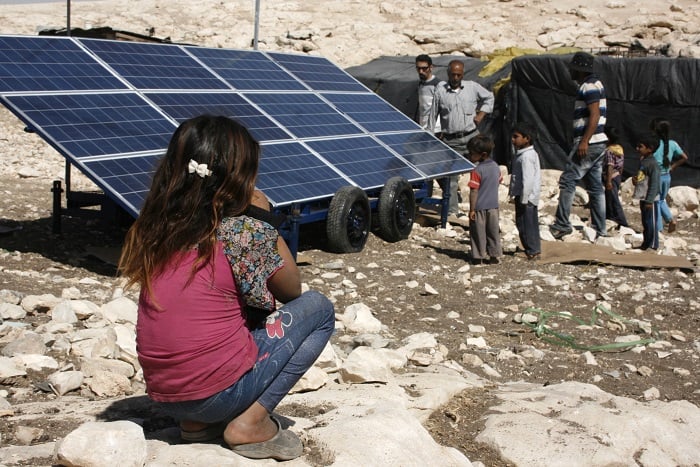 JERICHO (Ma’an) — Israeli forces on Wednesday injured a child during a raid on a West Bank Bedouin village in which they also confiscated solar energy panels donated to locals by a local sustainability organization, a local official said.

A Fatah party official in Jahalin, an area in the central West Bank near Abu Dis where large numbers of Bedouins live in small villages, said that Israeli soldiers raided the encampment near al-Khan al-Ahmar where 22 families live.

He said that the soldiers seized 12 portable solar power panels which had been donated to them for their electricity needs by the Applied Research Institute Jerusalem, a Palestinian organization that focuses on sustainability and self-sufficiency for Palestinians.

During the raid, the Fatah official said, a child was assaulted and left with bruises. He was subsequently taken to a Jericho hospital unconscious.

The encampment raided by Israeli soldiers is one of 21 where Bedouins live in the Jahalin area.

Israeli forces have shut a number of roads into the area in the past, part of a wider effort to evict Bedouins from the area, which is close to the Jewish-only settlement of Maale Adumim.

The Jahalin area is located in the strategic E1 corridor which connects Jerusalem and Maale Adumim. Israeli authorities have frequently expressed their desire to build in the area, a move that would cut the Palestinian West Bank in half and effectively make any Palestinian state impossible.

Since early February, Palestinian activists have maintained a protest camp nearby set up in opposition to Israeli plans to displace Palestinian Bedouin families from their dwellings in the corridor.

Last summer, Israeli authorities in the occupied West Bank released a series of plans that would concentrate Bedouins in two places and destroy more than 20 of their current villages.

Rights groups slammed the plans, adding that the forcible transfer amounts to a massive land grab and an attempt by authorities to annex the crucial E1 area and effectively cut the West Bank in two.

A statement released in September co-signed by 42 Palestinian, international, and Israeli organizations said that the plans “include moving Bedouins out of the politically sensitive area referred to as the Jerusalem Periphery or ‘E1,’ where Israel has long-intended to demolish 23 Bedouin villages in order to expand and link settlements, established in violation of international law.”

The majority of Bedouins in Israel and the West Bank live a relatively settled but still sometimes semi-nomadic lifestyle, residing in permanent villages but pasturing livestock in adjacent areas.

Israeli restrictions on movement — in order to build Jewish settlements on Palestinian lands previously used by Bedouins or through the construction of the Separation Wall to cut through the West Bank — have severely curtailed Bedouins’ traditional nomadism.