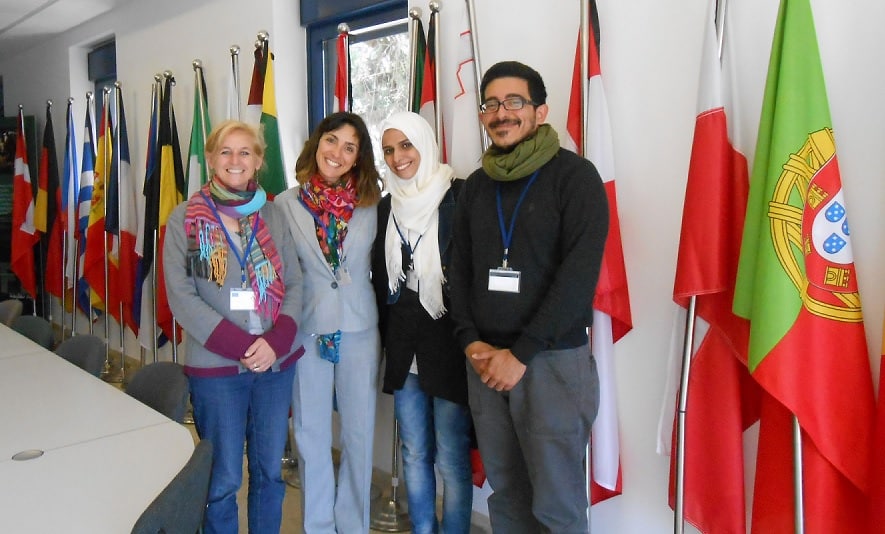 Among the many benefits one can have working for an international NGO was the chance to do what was once considered impossible. This can be confirmed wholeheartedly by VdT local coordinator, Mss. Sara Alafifi, working on the project: “Promoting the Bedouin Center “Children’s Land” as a participatory lab for community development in Gaza Strip. Cod: DCI-NSAPVD/2013/333-872” founded by European Union and implemented by Vento di Terra NGO in the Bedouin village of Um Alnasser, north of Gaza. The impossible mentioned here is for a young Palestinian girl from Gaza to be able to cross Erez border into the other side.

On Wednesday, 24th March, 2015, Mss. Sara Alafifi crossed Erez border for the first time using a permit issued for her at the request of Vento di Terra NGO, accompanying her were Mss. Cinzia Rizzioli, manager of the project and Mr. Mitia Aranda, expat architect working on the project. This trip had as a main purpose meeting Ms. Beatrice Campodonico, the task manager at EU office in Jerusalem the next day.

The meeting took place Thursday morning at 11:00am. Ms. Beatrice and Mss. Gaya, a communication Officer in the EU, received Mss. Sara, Mss. Cinzia, and Mr. Mitia very warmly reflecting the good spirit of EU staff members. And as it was the first time for Mss. Sara and Mr. Mitia to be in the EU office in Jerusalem and after offering them coffee along with doing a small introduction of both sides, Mss. Beatrice took the chance to ask them about their roles in the project, what progress they have made towards reaching the foreseen results, and their impressions of the job so far. She also listened attentively to whatever questions and comments they had about their whole experience working with the EU as a donor, moreover; she gave them good advice on how to deal with some obstacles that are or might face them along the way while working on this kind of project.

In the end, it is only fair to say that the meeting was productive, satisfactory and well worth the time and effort given for it to be arranged.