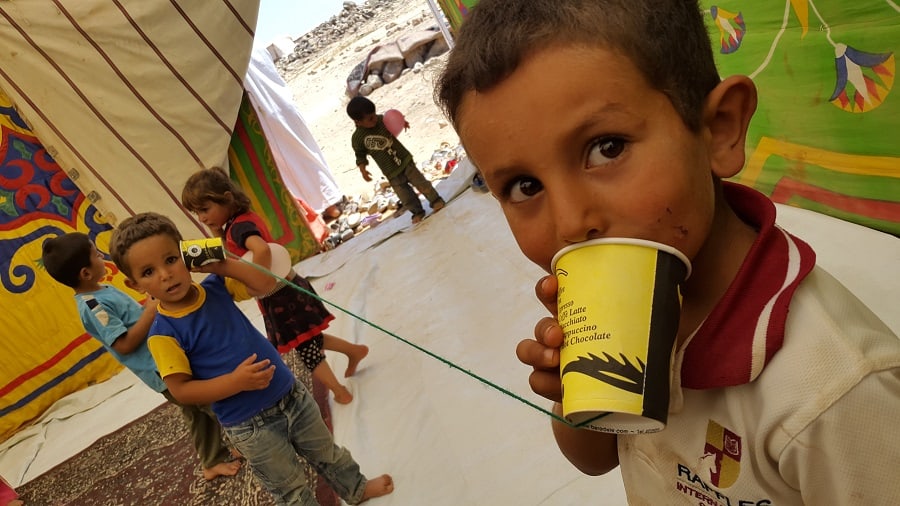 It’s time for classes in Jordan. Indeed, the school has never stopped, not even during the summer heat in the unusual school desk of Al Mafraq camp.

The history of these children starts from far away, from the border they crossed to the north of Amman to rescue their lives, together with their families. In their home villages they were attending school regularly, but in Jordan this is no longer possible. Older children, ages 10 and up, must start early to work, ften black work, because families are very poor and they must contribute too. For many others, still small, it is not possible to be accepted in public schools within the government training programs. The number of refugees continues to increase and doesn’t allow the state structures to give adequate response to the many needs of those coming in these months.

Thus is born the idea to create and invent in the Al Mafraq camps a school that does not exist. Thanks to two professional educators, an informal education support is offered every day for four hours. They studied mathematics, but especially the Arabic language, written and spoken. Parents fear that when their children will finally return in a real school will be disadvantaged compared to other children, because this war has made them lose precious months and years of training. School hours are so dense of study but also precious moments to tell children their experience and history. To try to verbalize and express the trauma of conflict, of having lost their homes, being arrived in a country from which they fear being driven out again, to who knows where. And so instead of numbers, they also try to draw, to express with colors the tangle of feelings that lead inside them.

Picking up the cry of those families who accuse the world to have left them alone in front of one of the most atrocious massacres of our history, Vento di Terra, with its operators, try to do something in these communities. To avoid falling into indifference and to remember that the rights, if universal, must be something for everyone.

DONATE A SCHOOL KIT TO A SYRIAN REFUGEE CHILD!