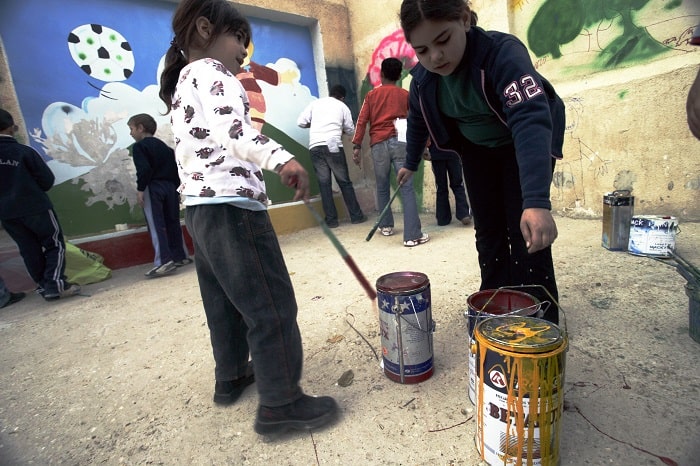 Vento di Terra organised and supported extracurricular activities in youth educational centers of Kalandia and Shu’fat Refugee Camps, near Jerusalem. In particular, these educational services cater to children between 6 and 14 years and their families, and promote through two teams of local educators:

Training sessions were carried out for the diffusion of skills at a professional level for the benefit of local educators.

Shu’fat Refugee Camp is located about 4 km from Jerusalem, surrounded by Israeli settlements, and is hosting about 25.000 people over a range of about 2 km square. Only 10.069 refugees are officially recognized by UNRWA, the UN agency that deals with the health, education and other basic services for Palestinian refugees. This means that less than half of the population has access to these services.

The Shu’fat refugee camp was founded in 1966, when the Palestinian population of the Jerusalem Jewish quarter was forcibly moved by the Jordanian government in collaboration with the United Nations, promising that they would have had houses to live in and land to cultivate. With the 1967 war and the Israeli military occupation of Jerusalem and the West Bank, new refugees were added to the first: the population has increased but not the extension of the camp and indeed the settlements are expanding. In addition, the boundaries of the camp, well defined geographically and not extensible, are near the Wall, built by Israel. It is a snake of reinforced concrete 9 meters high that closes the camp and separates it from the nearby Israeli settlement of Pisgat Ze’ev, the metropolitan area of Jerusalem, the highway to the Dead Sea and the neighboring Arab villages. The population, steadily rising (families are composed on average 7,73 people and the average age is 17 years), is likely to see further eroded their basic rights: mobility, education, employment, health care. The movements are severely limited by the presence of a fixed checkpoint to Jerusalem, which can be accessed with a special document, by the intrusiveness of the infrastructure for the settlers and by the checkpoints on the side of the West Bank. The classrooms are overcrowded and this mobility limitations prevent or hinder significantly the access to secondary schools. The unemployment rate is around 70% and UNICEF report indicate the presence of a third of children suffering from malnutrition. In the camp we report a high incidence of intestinal and respiratory diseases due to poor water quality and garbage disposal problems. The situation has deteriorated from the elections of 2006 and the decision of the European and American governments to block aid to the Palestinian Authority.

The Kalandia Refugee Camp is located on the road between Jerusalem and Ramallah, adjacent to the Israeli checkpoint separating Jerusalem from the West Bank to the north. The camp was founded in 1949 on an area of 353 dunums. The Israeli authorities consider the area on which the camp stands a part of the so called “Greater Jerusalem”, although in fact it is cut off from the city by the wall and it is included in the Ramallah influence zone. Following the Oslo Accords of 1995, the Kalandia camp was defined as area “C” and remains under the administrative and military Israeli control. The official number of refugees is 10.024, to which must be added thousands of other refugees, around 10.000 other “unofficial”, moved in the camp in order to take advantage of its proximity to Jerusalem, creating a situation very similar to the one in the Shu’fat camp.

Only “official refugees” have the ability to access Jerusalem having an identity card issued by the Israeli government that allows them to pass the checkpoint. The other half of the population is forced to go to Ramallah, a city already with economic difficulties and deficient services. This situation contributes to maintaining a high level of unemployment, around 70%.

The overall situation in the field remains disastrous, because of the overcrowding, the chronic lack of services and the constant tension situation caused by the closeness of the Israeli checkpoints. In particular, the situation of children is worrying, because of the partial closure of the youth center, unable to carry on activities due to the inadequacy of the structures and the complete absence of funds. Children, in such a difficult context, manifest violence, which has serious consequences in the affective and behavioral spheres.