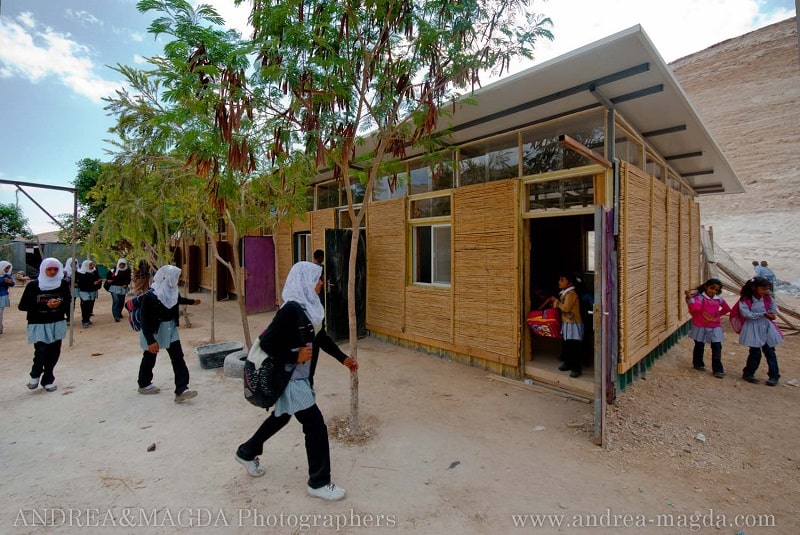 Abu Hindi Bedouin village is located in the east of Jerusalem in Area C of the West Bank, under the control of Israeli administrative and military authority. This area is semi-arid and without basic services as water and electricity and the only connection is a dirt road. Most of the approximately 3,000 inhabitants of Abu Hindi suffer from respiratory diseases: poisoning, skin diseases and leukemia, due to the presence of the landfill of Maale Adumim. The Bedouins are victims of attacks by settlers and the school has already been demolished twice by the Israeli army in the 90s. Before our intervention, the complex was built only with bare metal.

Classrooms’ rehabilitation took place in 2010. The project was designed by ARCO’- Architecture and Cooperation, with the active participation of the local Bedouin community. Responding to the constraints imposed by the Israeli authorities, the school was rehabilitated from the inside. The existing roof has been substituted by sandwich panels, raised and inclined, generating new opening strips from different heights which allow the natural ventilation. The exterior walls have been modified with the technique of “pisè”, becoming a multi-layer wall 34 cm. thick, including an interior lime plastering, bamboo layer, straw and clay mass, existing exterior iron sheet, micro-ventilated air chamber and exterior panels of bamboo. The new partitions between the rooms have been re-built with mud bricks.

The rehabilitation of the school is part of a wider program aimed at improving the living conditions of Bedouin communities, promote their rights and ensure basic services.

The School of Bamboo houses 130 Jahalin children and 15 teachers. The project is related to the School of Tyres ​​in Khan Al Ahmar. Its local partner is the Jerusalem Committee Bedouin in Anata (East Jerusalem). Vento di Terra’s educators propose afternoon activities in Abu Hindi from the project “The Playing Tent”.

In February 2012, the  Honourable Massimo D’Alema and the Italian Consul Giampaolo Cantini visited the school. It was restored with the help of the CEI and the network of the Lombard municipalities. The school won the second prize at the Renzo Piano Fundation Award and the Global Holcim Awards 2011 for Africa and Middle East.